In brief, what are Fire Rated and Protective Coatings, and how do they work?

Advanced Applicators have been a leading applicator of Intumescent Coatings since 2002. We also pride ourselves on our ability to provide architectural finishes as required, and protective top coats for external locations.

Intumescent coatings come in both single-component formulas, and epoxy (two pot) formulas. They are much simpler to apply than other fireproofing products are therefore accompanied by far lower labour costs. 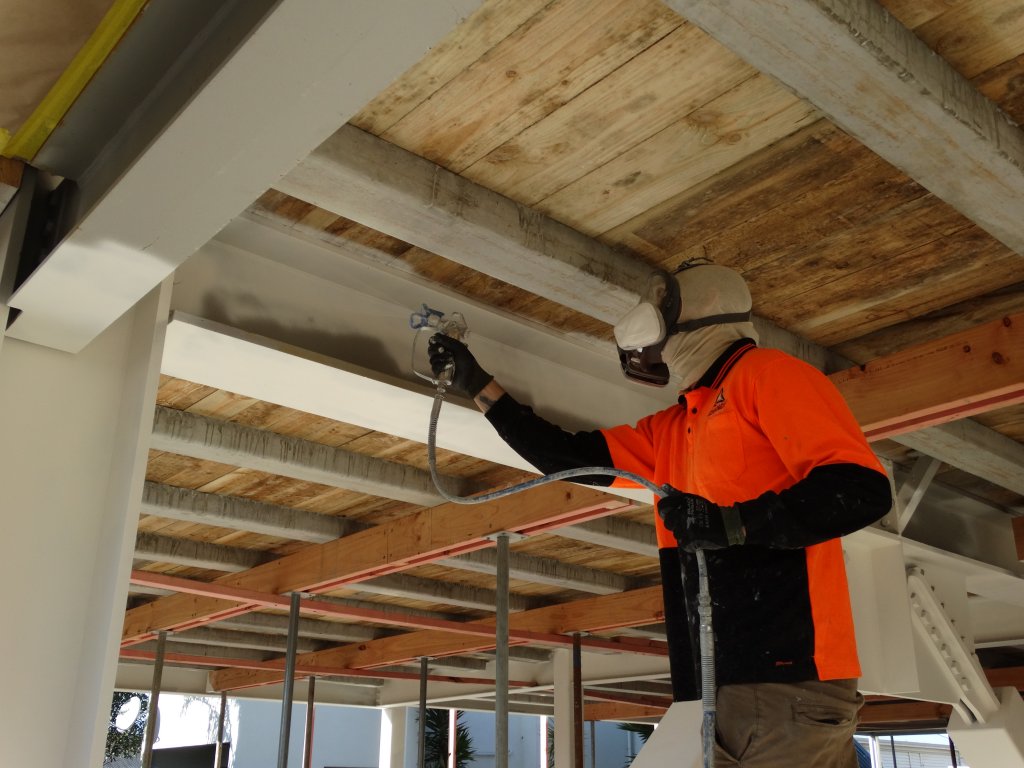 Want to know more about the science behind Fire Rated Coatings?

Cementitious coatings contain Portland cement as a component and are held onto a substrate surface with a binder. They are generally composed of inexpensive raw materials that are sprayed onto a substrate at a minimum dry film thickness to provide a fire rating for a given time. They are lightweight and don’t significantly add to the weight of structural members.

Intumescent coatings work by charring and expanding in the presence of extreme heat. The increase in volume and subsequent decrease in density slows the heating of the substrate (typically structural steel members), slowing the steel melting or deforming. Intumescent typically swell to 25 times their original thickness when engulfed in flames. This expansion allows them to provide a barrier between the flames and the steel thereby preventing the structural steel from reaching a critical failure temperature for a stated period of time. The intumescent coatings work with the other passive fire components of a building to save lives as well as contain fires within predetermined areas which may allow the fire service to protect neighboring properties.

Intumescent coatings are available in both solvent based and water-based formulations. They can also be overcoated with a topcoat to prevent extreme weathering and provide durability. These topcoat systems can also be tinted to almost any colour or shade to provide architectural finishes. The two component intumescent formulas are now so durable that you can hit the finished product with a sledgehammer with no detrimental effects.  Additionally, since they are applied directly to steel, no gap is created in which moisture can sit and incite corrosion. Intumescent coatings fight corrosion in much the same way as traditional protective coatings, the difference being their ability to swell and the much greater thicknesses at which they are initially applied. With all of the benefits of intumescent coatings combined, it’s our recommended method of fireproofing steel.

We also apply clear coat intumescent for timber features as well as pigmented products to fire rate both timber and plasterboard. These products are extremely useful for modern architectural buildings where a fire rating is required for atriums or open spaces designed for use by many occupants.

How does the thickness of an Intumescent Coating effect the Fire Rating?

Adding thickness to an intumescent coating application increases the amount of swelling that will occur in the case of a fire incident. For example, if a 350-micron coating of a given intumescent has been determined to have a fire rating of 90 minutes, 700 microns would theoretically be necessary to achieve a fire rating of 3 hours. In reality though, added thickness is sometimes specified in certain areas such as curves and crevices, so something like a thickness of 750 microns may be required in order to achieve a 3-hour rating.